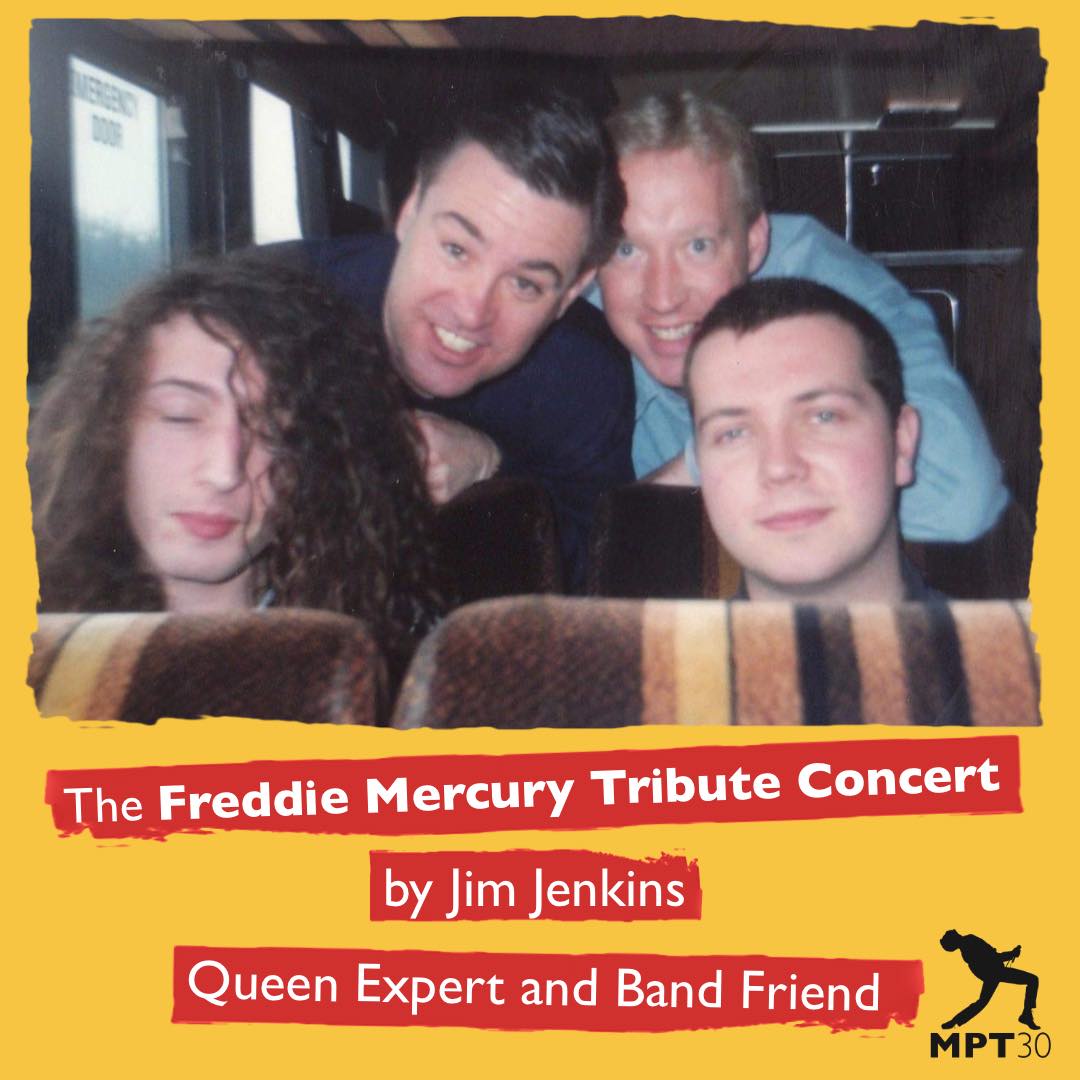 “Look there’s a very bright star up there shining down – it's Freddie!”

The Freddie Mercury Tribute Concert as remembered by Jim Jenkins, Queen expert/co-author of ‘As It Began’ and band friend.

When I was told about the Tribute Concert I decided to organise a coach from Liverpool to make travel a bit easier to London.  Contacting friends telling them about the show everybody agreed to go, even some from outside the Merseyside area said they would travel with us. As soon as I had the date I telephoned the coach company and booked the coach. They were puzzled why I wanted a coach to Wembley!

In preparation for this huge event, I gathered friends to make thousands of red ribbons which would be handed out at the venue.  Quite a few weekends were spent doing this task which caused much laughter, which was what we all needed since Freddie’s passing had a big effect on us. A trip down to London to the band's offices in Pembridge Road was inevitable, carrying loads of black bin bags full of folded ribbons. A new charity was being launched at the event. The Mercury Phoenix Trust.

As news filtered through who was appearing the excitement started to build and Easter Monday arrived quite quickly and we all met up outside the Empire Theatre in Liverpool city centre, the theatre where Queen had played many times in the ’70s. Nobody was late and we set off. The major chat on the coach was the appearing artists and the one who was the least looking forward to was George Michael. Not many Wham fans on the bus! As the coach pulled up outside the steps of Wembley Stadium and we all piled off as the gates opened so we all ran onto the pitch, many running to the front.  I decided to stay on the pitch with my friends as my sister was looking after mum in the seated area. I had mixed emotions and wasn’t sure how I would feel seeing Brian, Roger, and John on stage without the legend Freddie Mercury!

The three remaining members of Queen walked out on stage to a roar as loud as Wembley attendees could give. Yes, there were tears from some in the crowd, including yours truly! There were many highlights on the stage but the surprising hit was George Michael! His rendition of Somebody To Love was mesmerizingly superb!  It surprised many of us. Yes, we knew George could sing but not that good! David Bowie’s Lord’s Prayer added something to the proceedings. Everybody around me joined in with him. It felt right to me! Freddie’s appearance on the big screen caused the tears to flow. When Liza Minelli came on stage my stomach churned. Oh, how proud would Freddie be to have one of his favourite singers performing one of his songs?  One of my mates pointed up to the sky and said “Look there’s a very bright star up there shining down – it's Freddie!” More tears flowed! It was surreal. It really was an emotional roller coaster ride at this concert. I have never been to a concert like it and probably never will again. An amusing moment though was when people were looking at their watches and were saying the video recorder was about to cut off!  There was an unbelievable amount of talent on the stage that night and how the three band members held up I will never know.

Finding the coach when we came out of the ground was very difficult. I don’t know how we all got back to it quite handy and we managed to head north quite quickly. The major topic of conversation going home was how great George Michael was! Total opposite of traveling down! We stopped at a service station and as the newspapers were available we bought them all to read on the rest of the journey home. Once back in the house I checked if my recorder had cut off or had I managed to tape all the show. I was lucky, I did. Watched a bit before trying to get some sleep as I was off to work 2 hours later!

Easter Monday 1992 was a long memorable day, I will never forget it. But, one concert I wish I didn’t need to attend. Can’t believe it’s 30 years ago and the Queen story continues. Freddie would be proud. I just know it! He had the send-off a legend deserved. Gone but never forgotten.